HomeChildren and ParentsOn Being a Military Wife and Mother 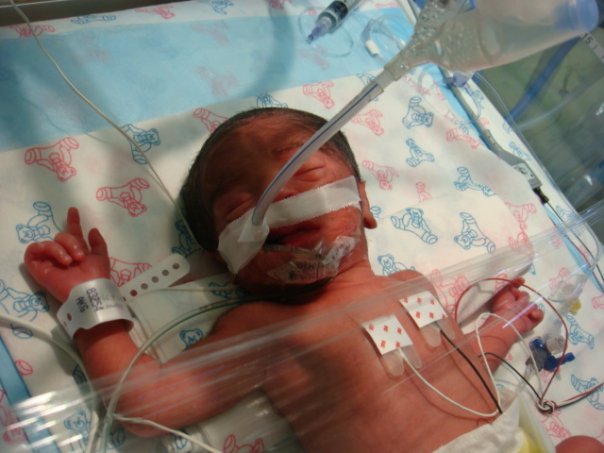 My name is Xiomara Montes, I am 35 years old, born on the island of Puerto Rico. I have 5 years of marriage, and my husband served in the U.S. Armed Forces. We have 3 beautiful children, two girls and one boy. Our first daughter is 10 years, a very intelligent girl and academically excels in school. Our boy, who is 2 years old, is the baby of the house, happy, always smiling and very active.

Our second daughter is 4 years. Her name is Xaymara. She was born on December 28, 2007 at 2:00 a.m. in San Juan, Puerto Rico, only 29 weeks old. She weighed 3 pounds 10 ounces and measured 16 inches. It was unexpected, given the fact that during pregnancy there were no problems. She was quickly taken to the intensive care unit and stayed there 37 days, battling for her life. When discharged from the hospital, we took our home a healthy baby at first, but it was very difficult to handle. She was crying all the time; only me or my husband managed to calm her. At night she slept with me because there was no other way to get to sleep. 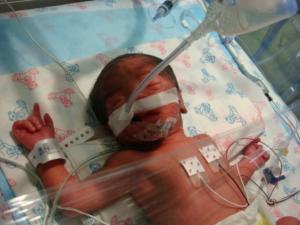 In the next six months, we went from appointment to appointment with specialists, pediatricians, but neither said anything. After six months of doubts and questions, we made an appointment with a pediatrician, a specialist in development. She did some tests and decided to send her to do an MRI. As the day got closer to have an MRI, my husband and I made the decision to move to the United States, if the result of MRI confirmed what the pediatrician had said. My husband was a reservist in the Army and we both worked full time and had no one to help us, but with the medical and other costs, we were too far in debt.

In July 2008 the MRI was performed and the results have confirmed what the pediatrician had said. Our baby girl had PVL, hydrocephalus, and cortical blindness. It was hard to get these results, but we face things with maturity and so my husband decided to switch to active duty in the Army. The benefits of being a military wife are many. The most important is the health plan. When my daughter was born at 29 weeks, my husband was only a reservist in the army. My husband and I consider that he entered active duty in the army, and move from Puerto Rico (our homeland) to the United States and provide a better quality of life for our daughter, and have a good health plan to help us defray the medical expenses. For me it was the best decision, because I do not have to work, and I can devote all the time to take care of my daughter.

We came to North Carolina in August 2008. After a month we had the first appointment with the neurologist and the tests and reviewed all files of the baby and confirmed the diagnosis of Cerebral Palsy, spastic quadriplegia, Epilepsy, Seizures disorders, hydrocephalus, and cortical blindness.

In the following years, she has seen various specialists — pediatric ophthalmologist, pediatric orthopedist. She receives speech, occupational, and physical therapy, in additional to therapy for vision. Since we’re in the Army, finances have eased. The Army paid for all medical expenses of our girl and all the equipment she needed, such as wheelchairs, chair for the bath, the toilet seat, car seat, and other equipment to make it more easy for us and of course for her.

In July of 2011 we visited the orthopedist, and on that visit he took x-rays to check the hips. X-rays confirmed that both hips were not positioned in the right place. So the orthopedist explains what may happen in the future, it was dislocation, and their best option was to operate. So we decided it was best, and the operation was conducted in late August 2011, and the doctor also performed cut tendons to lengthen and to release some tension. It takes 3 weeks in a cast, everything was difficult, the bathe, move, dress, and transport. At the end of September 2011, the cast was removed, and had to deal with muscle spasms and pain. It took about 6 months to recover from this operation. 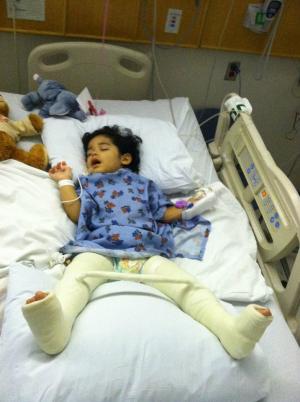 At the end of November 2011, we moved from North Carolina to Washington state. It’s been a big change for the benefit of all. The military hospital is more prepared with specialists and doctors that my daughter needs. My daughter always had trouble eating. She had lost much weight since the surgery, and nutritionist recommended us to see the gastro. The gastro recommended to put a GTUBE it, but before taking this decision, we wanted to make three studies: Swallow Study, Gastric Empty Study, and Upper GI. The impression of these studies was she has a severely delayed gastric emptying and aspiration to her lungs. From the results the doctor decides that the best is to place the GTUBE, and additional perform a Nissen fundoplication and a pyloromyotomy.

This surgery was performed on April 12, was a success. She was hospitalized 5 days since the surgery and has increased 8 pounds.

When my daughter was diagnosed with CP, she was 9 months. Already in my mind was not having another baby, at least not for the next 2 years until we established, and I understand everything about the condition of my daughter. But, the next month I discovered that I was pregnant. It was traumatic and I take time to accept, but for the fact that my husband would come out in the coming months to Afghanistan. It was hard, my husband left when I was 7 months pregnant, my son was born and I had no one, but I could deal with having two babies and do it all alone.

Even today, we even discussing the idea of having another baby, but I’m not too sure about that.

We had a genetic consultation, which helped us to understand a little more, things that we do not know, but which remain a mystery to us. Now it will do the same test me and my husband, to know from where these genes were deleted or mutated. Depending on how are the results of our DNA, we will decide if we have another baby or not.

For me to stay healthy and be supportive to my children, I work out at my house, I have a treadmill, and in the morning while my children still sleep, I walk or run a little. And always during the day I spend time alone and my husband and I with each other. 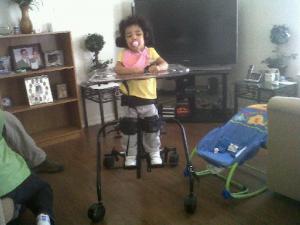 Check back next month for updates and more tips for navigating military and special needs family life.