I fell in love with stories when I was five. My grandmother from Tennessee, who had lost her husband in the flu epidemic of 1917, came for long visits. My mother told me it was my job to make her take a nap every afternoon, so I’d lead her to the big double bed where she’d read to me. As she lay against the pillow, I’d touch the skin on her face, as delicate as lace. Her permed-gray hair was tinted pine-needle red, and she wore it in a style similar to a pot scrubber. She was one of the best playmates I ever had, and I loved her fiercely. When she read to me, her voice lapped up and down on a story like an ocean’s tide. When she dozed off, I’d elbow her to get her voice going again.

The fact that she could read and I couldn’t was a troubling power that she had over me. She could boss me around and I’d have to do what she said; in fact, everybody who bossed me around could read. So at the breakfast table I began asking for the newspaper, and then I’d pretend to read it. I stayed a long time with my arms holding the paper up, my eyes going back and forth on the print, because that’s the thing about a lie: once you start one, you have to live it out, or else you have no character.

But then, what a splendid time it was when my brain clicked in, and I discovered that words had sounds of their own. I could close the book and then open it again, and there the same words would be on the page, speaking out of the silence and moving in their own worlds. I thought of this as the magic of silent language, and the words themselves were the storyteller’s fingerprints.

My falling in love with stories has given me a long, fortunate career as a writer: a New York Times Notable book, a CBS movie made from my second novel, so that I actually went to Hollywood to watch my invented story being filmed. In addition, I’ve aired tons of essays on NPR over the last fifteen years, making my southern voice recognizable in most public places, which, as a result, means I can’t cuss in public nor rob a bank. And when a few years ago, I decided to write a children’s book to capture a generation’s heartfelt compassion for a racehorse that broke his leg, I became the author of the bestselling children’s book, Barbaro, America’s Horse.

Soon after, I began writing my memoir, The Polio Hole. I thought it was time to do that: to write about being in the polio epidemic in 1950, to preserve a cultural history that was about to be lost. I didn’t want to make that story just about me in particular; I wanted to make it about the psychological journey of any child facing a life-changing experience. I also wanted to document the scientific development of the Salk vaccine, because it is a story about to be lost to current generations, and for a wacky reason. Jonas Salk refused to have a movie made of his long, arduous challenge in finding a vaccine to end a national nightmare of epidemics. He’d had enough of the public spotlight at the dawn of television, so his story of a search for a vaccine was preserved only in print, which, in today’s current movie-crazy culture is often considered too long and taxing for those who prefer stories told in images. 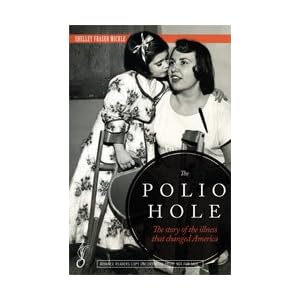 However, a funny thing happened on the way from my writing the opening of my memoir to the last page: I suddenly became troubled—frankly outraged—in realizing that there are so few lasting literary characters with physical differences in children’s literature. And our two most famous are getting darn old: Tiny Tim, who is sweet and dear, but mostly an object of pity. And Rudolph, whose red nose was a burden until he turned it into a headlight, which he gets to use only once a year.

Taking Mark Twain as a model—who in the last chapter of his career became a publisher, bringing out Ulysses S. Grant’s memoir— I decided three years ago to become a publisher myself. Simply, I want to fill this need in American culture: to bring out books that star a kid with a physical difference in a heroic role. In essence, I am creating Franklin Roosevelt characters in children’s books, stories with kids as mischievous, dream-bitten, as lovable as any other child. My partner, my husband, a retired pediatric neurosurgeon, named the press. He called it Wild Onion, because as a young boy in South Carolina, he joined in a game in which you put a wild onion stalk into a doodle bug hole, so that when you pulled out the stalk, the bug was often holding on for dear life and you could see it for real. Now, there is absolutely no symbolism in this image for our company: we are not wild; we are not onions. We simply like the name; it is not too sweet, and it is hopefully memorable. We are putting out titles in which a physical difference is not a disability but merely an outstanding characteristic. We have brought out seven titles in two years and have three more in development. The authors we are publishing are authentic and spectacular. As my grandmother often liked to say, “A story most often is the best way to change the world, or at least a mind, one at a time.” Yes, one at a time and the world is the limit. Stay tuned and watch us grow.