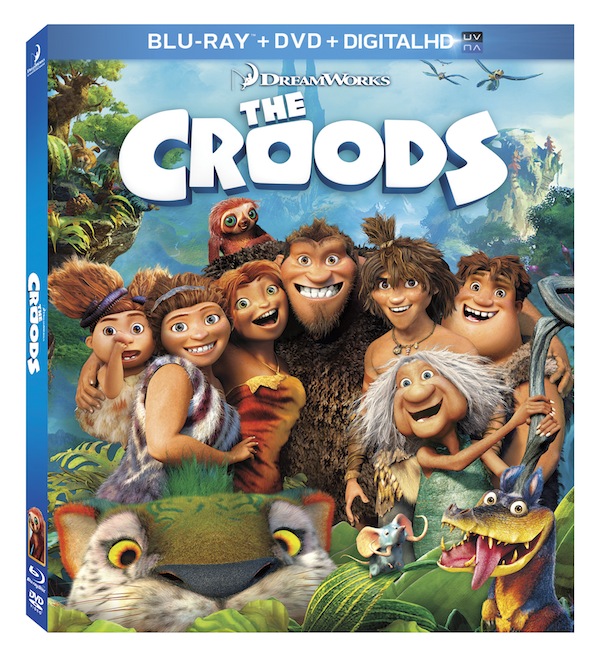 When it ran in theaters, audiences made The Croods the biggest animated movie of the year bringing in 585 million dollars, and now this hit family is available for home viewing. The Croods is the first family film that features an entire family.

At a gathering of domestic and international press presented by DreamWorks Animation Studios, filmmaker Chris Sanders explained they set the story in the “Croodacious Era” because there were “no boundaries” and they could make up interesting plants and animals but keep it believable. Setting the film in this fictional yet somewhat realistic (emphasis on “somewhat”) time period allowed the filmmakers the freedom to create a new world from scratch.

The characters have memorable names. Most are monosyllable names keeping with their spirit. Who would have thought to name the guy “Guy”? But it works. Grug (the father), Eep (the curious teenage daughter), Gran (the grandmother), Thunk (the bumbling son), Ugga (the mother), and baby Sandy have become beloved characters for families around the world. They are a whole family who are dealing with typical situations families today confront, but they are doing it a very long time ago. It goes to show, families are families no matter when they exist.

I asked filmmaker Kirk DeMicco if Nicolas Cage was in their minds when they were writing the story. Cage voices the father, Grug. “We were writing for him,” he admitted, and luckily Cage was available to do the film. Emma Stone voices rebellious teenager Eep, Ryan Reynolds voices Guy, Catherine Keener supplies the voice of Ugga, Clark Duke is Thunk, and Cloris Leachman is Gran. Perhaps the most adored character in this movie is little Belt, voiced by Chris Sanders who came up with the little ditty “Da Da Daaa” by accident. And those three syllables are now immortalized.

“Each of these characters is the iconic image of the universal family and display the universal parents/kids relationships,” the filmmakers explained. They are proud that the story is “relatable to kids of all ages, and all generations are explored” in this story. Even though they display their actions in silly ways, this is an endearing family, and their trip together is reminiscent of many viewers’ family road trips.

Besides Belt’s memorable “Da Da Daaa” another catch phrase from the movie comes from Grug, who shouts, “Release the baby” and sends little Sandy on all fours out hunting their food. It’s not quite “Let the force be with you,” but it is a cute phrase that has captured the attention of audiences.

Bonus features in this combo pack are not only entertaining, but also clever and provide viewers a little bit more insight into the film, the story, and the making of the movie. Filmmakers Kirk DeMicco and Chris Sanders introduce several scenes that were cut from the movie either because they felt they didn’t help the story or because of time. The scenes are fun and humorous even though most of them are only in storyboard form.

“Belt’s Cave Journal” is a little side story with Guy and Belt who discover a lost Jackobat. Together they help the little fellow find his family. Guy describes his best buddy Belt as a “cook, conversationalist, and navigator.” Little Belt is a a character that will never be forgotten by anyone who sees the movie.

And what might be the most popular of the bonus features are lessons on drawing three of the creatures in the movie: Belt, Macawnivore, and Mousephant. Sean Sexton breaks down the steps to draw these animals so even if you aren’t an artist, you will be able to create a fairly good representation of them. On a personal note, Sean Sexton gave several members of the press some lessons in drawing these animals and he is a great instructor. And, if you don’t get it the firs time, you can always replay the lessons until you are drawing the creatures like a pro.

Several more additions (including a coloring and storybook-builder app) are included in this combo pack. The single DVD contains a few of the bonuses, plus there is a 3D Deluxe Edition available.

The Crood family has certainly endeared themselves to audiences, and yes, there will be a sequel. Da Da Daaa!