The first day of the sports competition for the Special Olympic World Winter Games Austria 2017, the divisioning of the the teams from around the world. Divisioning is a unique system used by Special Olympics to give athletes of all ablities the chance for exciting competition and usually occurs before the start of the World Games competitions. What happens is that divisioning races, judge events, or short team matches are held to assess the athletes’ or teams’ ability levels in competition by team ratings or skill level. The athletes or teams are grouped into the divisions according to three criteria: gender, age and ability level., and there are a minimum of three and a maximum of eight athletes or teams in a division. The divisioning took place at all three different Special Olympic World Winter Games venues: Schladming, Ramsau, and Graz with the winter sports ranging from Cross Country & Alpine skiing to Figure & Speed Skating to Floor Hockey & Floorball, to Snowboarding and Snow Shoeing.

As much as I wish I could be at all venues to capture the exciting pre-competition events of every sport, I reluctanly but necessarily had to chose one; the venues were several hours apart, and that was the floor hockey events at the convention center in the city of Graz. I spent the day witnessing teams warming up then excitedly pumping themselves up, then put their heart and soul into their respective divisioning competitions as if they were going for the gold. But in spite of the events being called “competiions”, I noticed that the inter-team camaraderie was prevalent and that whenever a team member fell during the divisioning event, an opposing team member was quick to offer a hand up. Some of the teams I had the pleasure of photographing, and in some cases meeting, were the teams from Egypt, Hungary, Bharat, Nepon, South Africa, Bangladesh, and of course the United States Hockey team, the Gulls from El Cajon in Southern California. In each case, I found the coaches personable and friendly and the athletes eager to have thier photo taken.

My account of these events would not be complete without mentioning the many family members and friends in the stands cheering for their team, and in many cases, for all the teams in general – the camaraderie extended to them too. Throughout the day, there were broad grins and smiling faces and infectious laughter…an atmosphere contagious to all present, including me. If what I witnessed of the day was an eample of what is to come, then it is going to be one heck of an exciting and joyous Special Olumpic World Winter Games. 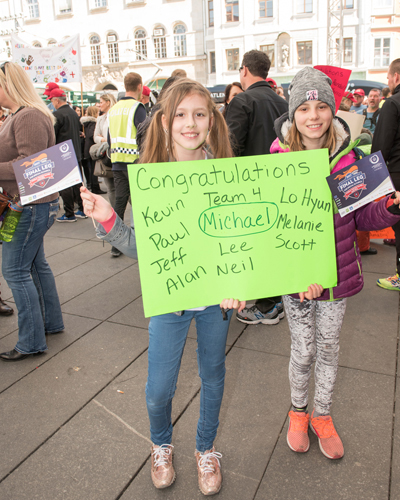 In additon to the division events, I took part of the morning to witness the Flame of Hope (Olympic Flame for Special Olympics) being proudly carried thru the streets of Graz by the Law Enforcement Torch Run team to it’s destination at the city square, followed by a group of light footed children – seeing this made me think of the inspirational scene in one of the “Rocky” movies where Rocky Balboa is being followed through the streets of Philidelphia by a bunch of school children while on his training run.

The arrival of the Flame of Hope was greeted by a crowd of cheering fans that filled the square to capacity, all seeming to be from all walks of life, from the elderly to the very young, from tourists to the locals but all equally joyous at the arrival of the Flame of Hope. The following ceremony comprised of various speakers, including the City of Graz Chief of Police and a children’s choir. After the ceremony ended and the Flame of Hope took part in numorous photo op moments with fans, it was taken away in preparation of the highlight of it’s journey – the opening ceremonies of the Special Olympic World Winter Games where it will light the Olympic cauldron, officially marking the start of the games.

To view all of this images taken on this day, visit the gallery here: https://goo.gl/0bygWP